Ready to Find Your Center? Come Join Us!

MONTHLY UNLIMITED
(NO COMMITMENT)
$ 145
PER MONTH

Embrace Yoga has moved. We are now located at 1122 4th Street in an urban setting in the heart of Central San Rafael in Marin. We are located in a historic building that was originally the first movie theater in Marin (called the Lyric) directly next door to Rafael Theater which then became the go to theater in the area.

Ready to Find Your Center? Come Join Us! 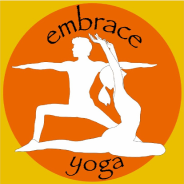